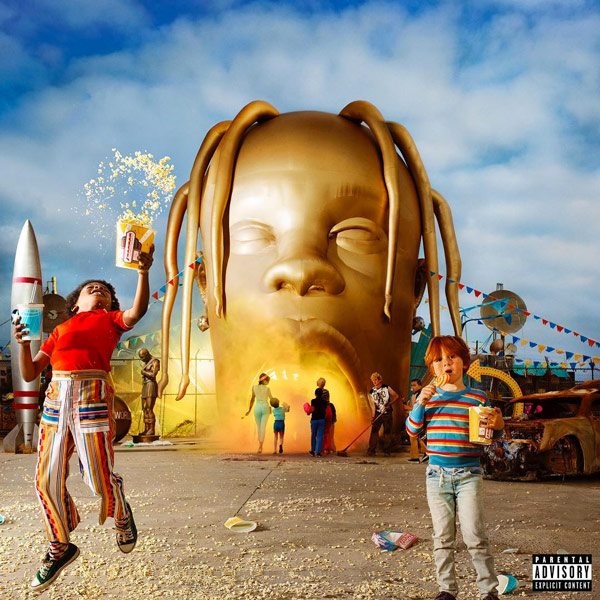 Hours before Astroworld and all through the house, not a creature was stirring, not even a mouse.

Travis Scott made it known that his next album would be called Astroworld so long ago, and it has felt like years since he released the classic Birds In The Trap Sing McKnight. Fans of Travis, myself included, came to the [not so serious] conclusion that it was definitely a myth; an urban legend of some sort. Like the Loch Ness Monster, or the Abominable Snowman. We all know Travis has been working hard on the album, and working hard in general, too; don’t forget he is also a new father.

A couple weeks ago there were rumblings about Astroworld being released soon; the real MVP of the summer, Mr. Mike Dean was posting videos and pictures of himself in the studio doing what he does best and of course everyone knew what he was working on. Travis and company were also out in Hawaii, too, making history in the studio.

July 30th, 2018: the day we FINALLY, and I mean FINALLY, got the release date for Astroworld, along with the album art that looks menacing as hell. Astroworld is not a myth; tonight it becomes real. Similar to the Loch Ness Monster and the Abominable Snowman, Travis Scott is sure leave destruction in what he leaves behind after this drops; and the creatures in the house that were previously not stirring are about to rocked out of their hiding spots to what we are about to hear.

Astroworld is definitely an album you can’t review after one listen. I listened to it all morning and couldn’t figure out the theme or what it’s about. I went to work and continued thinking of what it could possibly be about and finally I was able to come up with something: Astroworld isn’t about anything ‘deep’, or ‘meaningful’; Astroworld is about a day at the amusement park; Astroworld; that is definitely not on this planet.

Travis Scott has proven over and over again that he is ahead of his time, and he shows it yet again on Astroworld. Back when I listened to Rodeo I was blown away, then when I listened to Birds In The Trap, I expected it to sound like Rodeo did, but it sounded nothing alike, and I thought I didn’t like it, but less than a year later I played it again and realized it’s a classic. The same thing goes for Astroworld, I was expecting Birds In The Trap vibes but it sounded nothing like it, which threw me off the first couple listens, then I realized: Travis Scott is a true genius. I mean, I always knew that.

Like I said, Astroworld is about a day at the amusement park and having the time of your life while you’re there. Before you go to an amusement park you plan out how the day is going to go but when you get there, the plans fail and all hell breaks loose. That is what happens with and inside Astroworld, it is a wild album with twists and turns, nasty transitions and stomach turning beat switches.

The first track, “STARGAZING”, is a prime example of what to expect from the rest of the album. It is basically 2 songs in one, the way that beat switch happens; I did not expect that. It goes from a haunting RnB sound to a futuristic, space-y sounding rap song. This song is a sensational intro because it starts out as Travis stargazing on ‘earth’ then he hops in his spaceship.. or roller coaster and heads to Astroworld. And Travis is not coming back.

“STARGAZING” transitions flawlessly into the second song “CAROUSEL” featuring Frank Ocean, which transitions heavenly into the third song “SICKO MODE” featuring Drake, where Drake opens the song then is cut off for ANOTHER *ewwwww* beat switch where we hear Swae Lee echoing along with a smooth Travis verse before yet another exceptional beat switch where Drake returns for a killer verse over a Tay Keith produced beat. “SICKO MODE” is really a sicko song. A real sicko song.

This isn’t going to be a song by song review. Throughout the rest of Astroworld there are ups and downs; metaphorically musically, not the quality of music, of course. There are hard trap beats to smooth rapping to RnB sounds, while Travis Scott and his all star features use all their emotions and ranges to rap and sing over them. The songs are placed in a spontaneous order, but like I said, still transitions magnificently. Just like a day at the amusement park, nothing could go as planned but the day is still surreal, it all depends on the vibes you’re brining and who you’re with. On Astroworld Travis brings all the good vibes, all the lit vibes, all the LA FLAME vibes with his friends and that is how he was able to have fun making an album about fun and LIVING THE LIFE. Nothing is better than doing things with your true friends; your family.

Astroworld is another dominating album by Travis Scott that will be appreciated now, and later and will probably go down as a classic like the rest. The only thing I wish about Astroworld is that “WATCH” was on it, or at least another song with Kanye West and Lil Uzi Vert, but hey, we still got “WATCH” so I can’t complain. I don’t have a favorite song yet because there are so many to choose from. For now, I’ll rate it 8.5/10. I can’t wait to see Travis Scott live in concert; Astroworld, wish you were here.

3 thoughts on “welcome to ASTROWORLD by TRAVIS SCOTT. the review”